In December of 1971, I was living in Naples, Italy, where I had also spent a year previously, and a friend of mine who was at the time serving on the USS Cascade (AD-16) had a little Fiat 850 Spider. It was decided that we should take a road trip, and so we did. (How George managed so much shore leave was a mystery to me, but I wasn’t asking questions.) We drove up Italy through Cesena to Venice, past Udine to Vienna, across Austria to Lofer, down through the Romansch-speaking part of Switzerland, across the Lake Como area, and back. It was a wonderful trip.

I recently came across my slides from the journey, which I thought I had lost for years, and decided it was worth a post, if only so my friend, with whom I’m still in touch, could see them. The photography is hardly award-winning, but there are some pretty shots here and there.

Venice was cold and foggy.

I would later return to Venice many times as a consequence of my employment, in much better weather and more pleasant seasons. It is one of my favorite places on earth.

As we proceeded north, we broke out of the fog as we approached the Alps in the vicinity of Udine. The views were glorious. 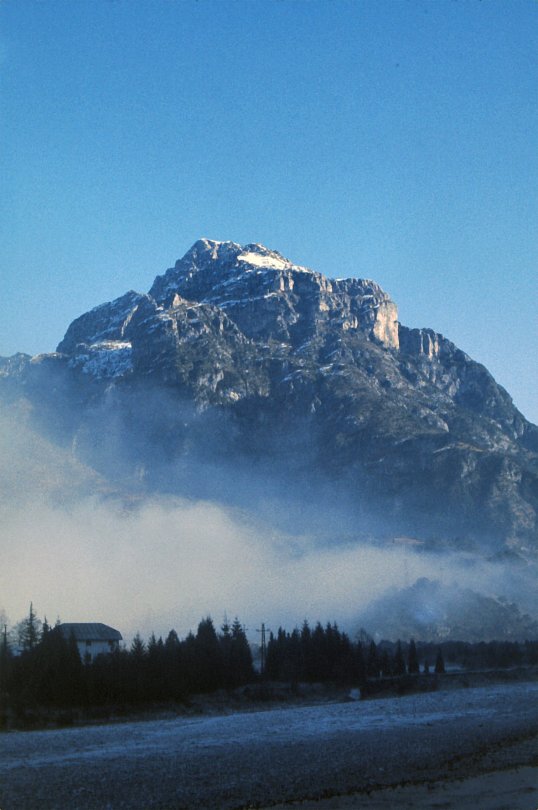 Found on the wall in an osteria (guest house) on the road – the sign says, “We’ll give credit when this rooster crows.” 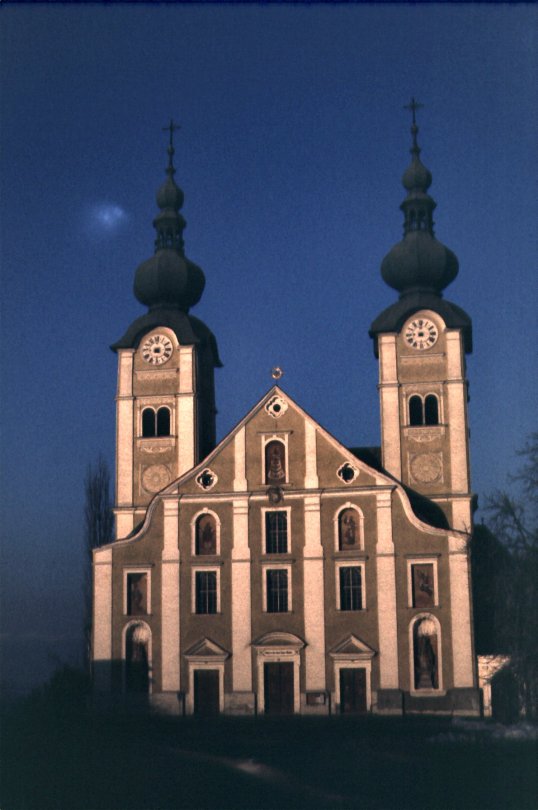 A church near Udine 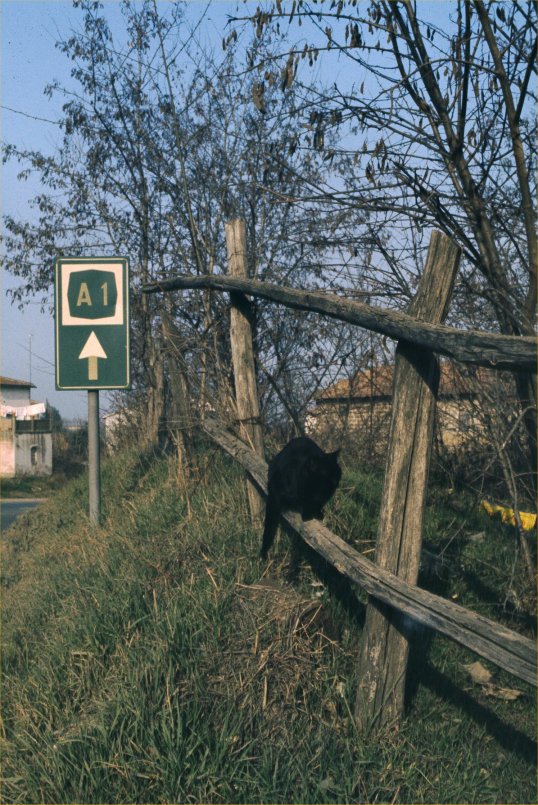 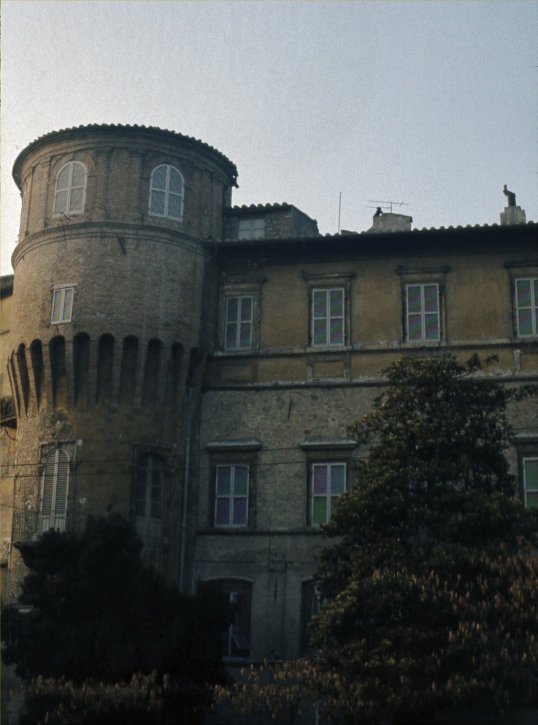 I would also spend about 6 months in Vienna in 1976, but even as early as 1971 I had this fixation on Beethoven, whose piano sonatas I was laboriously learning to play, and Vienna was like making a pilgrimage to Mecca. The weather was gray and wintry for the most part, but for 20-year-old me, it was still a gas being there. 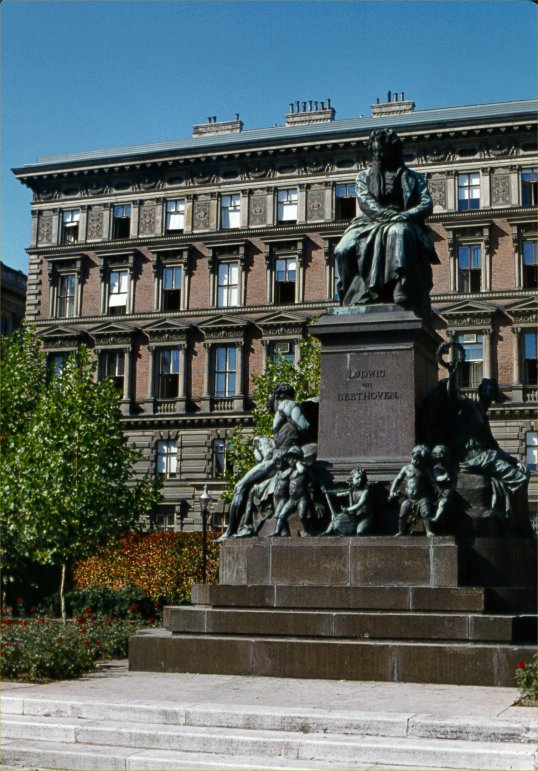 The Beethoven Monument, Vienna. You can tell by the trees that this was not taken in December; in fact, it was taken 5 years later when I returned to Vienna as a missionary. But it’s almost a clone of the picture that I took in 1971, albeit much clearer, so I allowed myself the substitution.

Der Allermeister in all his scowly grandeur 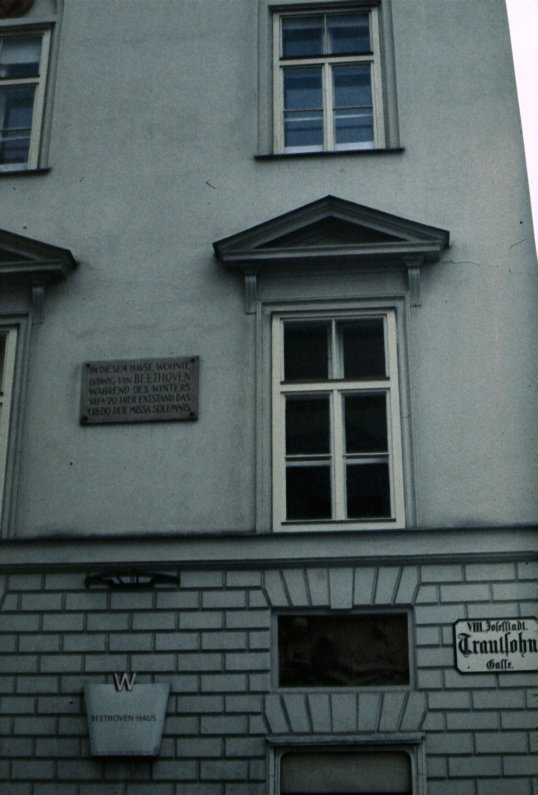 Beethovenhaus closeup – the plaque reads, “In this house lived Ludwig van Beethoven during the winter of 1819/20. The Missa Solemnis was written here.” 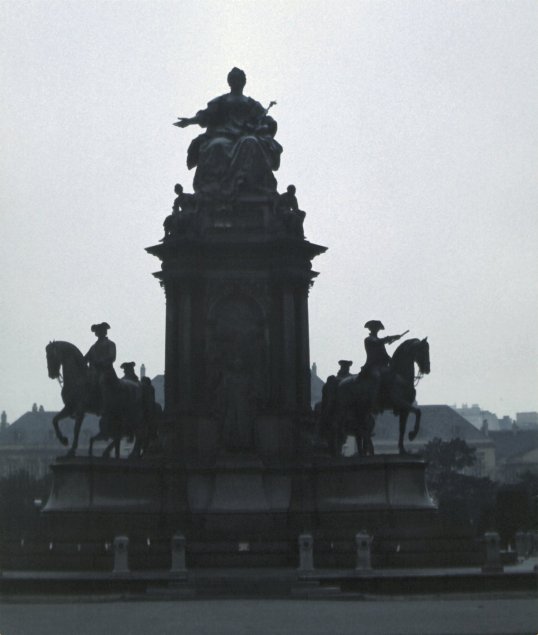 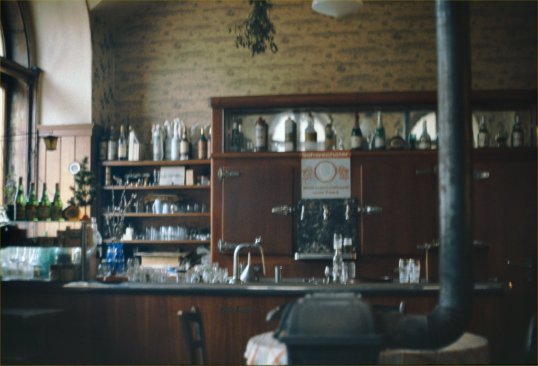 We stopped for cocoa in this warm and cozy restaurant

Vienna – Skaters. I can hear Waldteufel’s “Skater’s Waltz” playing in the back of my mind… 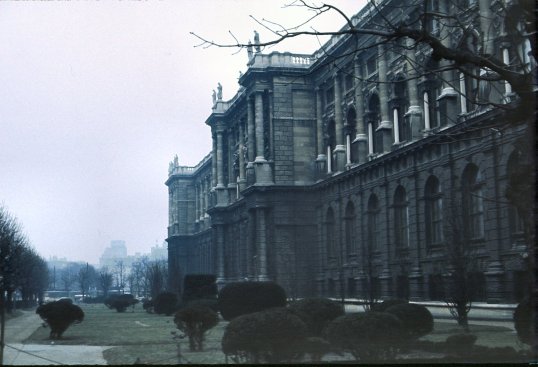 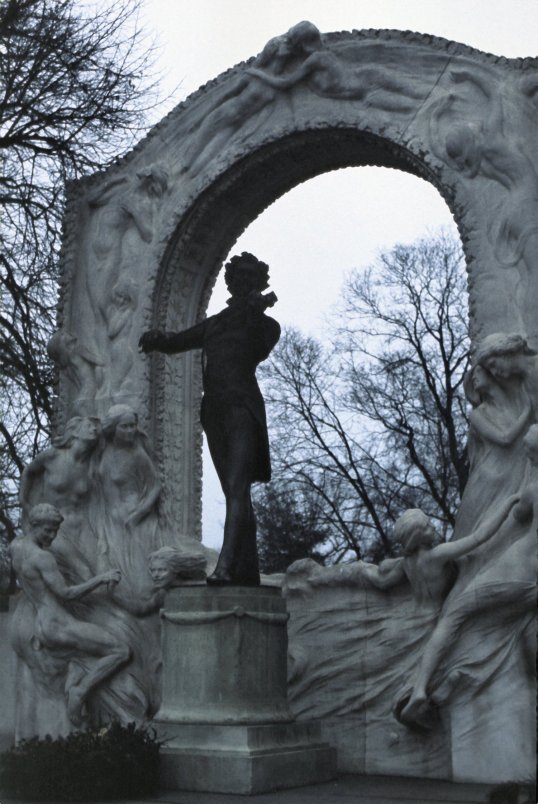 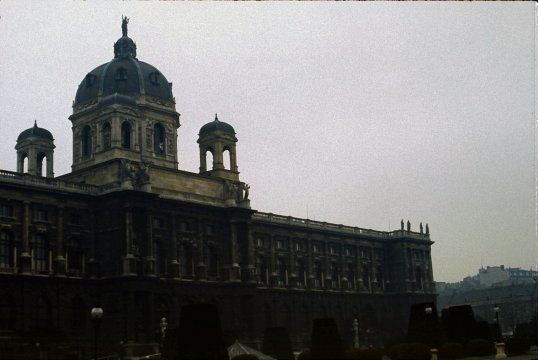 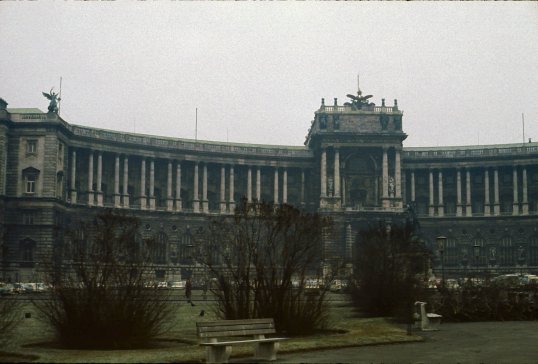 After Vienna, we headed west, and spent the night in Lofer, Austria – one of the most picturesque places I have ever seen. It still rivals many others, and often appears on Austrian travel adverts.

The hotel where we spent the night – 100 Schillings, breakfast included. That came to about $4.00, the Austrian Schilling being about 24 to the dollar at the time. 5 years later it was down to 15.

The Lofer church by day.

Church in Lofer at sunset. 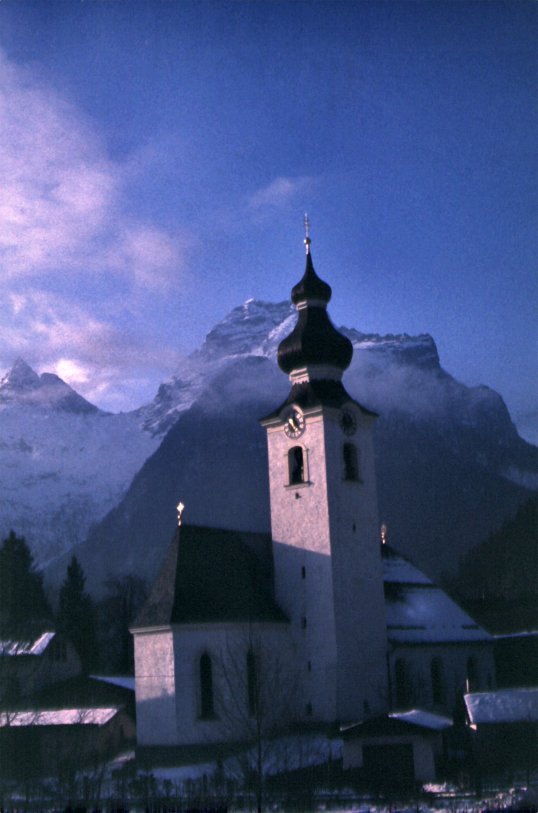 Another view of the iconic Church

The following pictures were taken in Austria at various points, but I didn’t have the presence of mind to label them at the time. As a result, the precise locations are unknown. 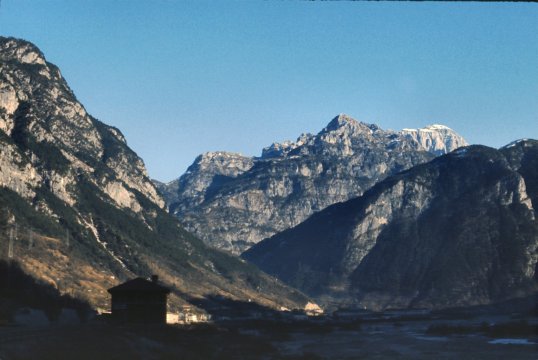 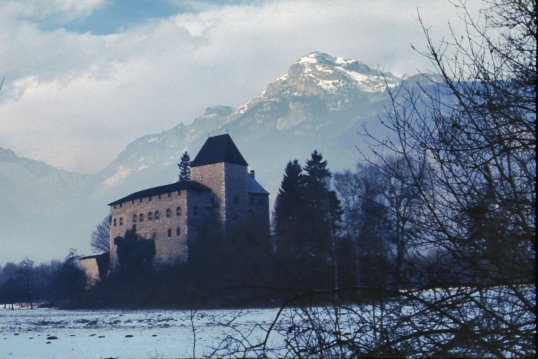 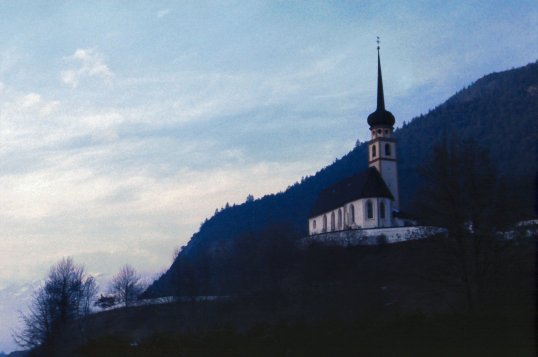 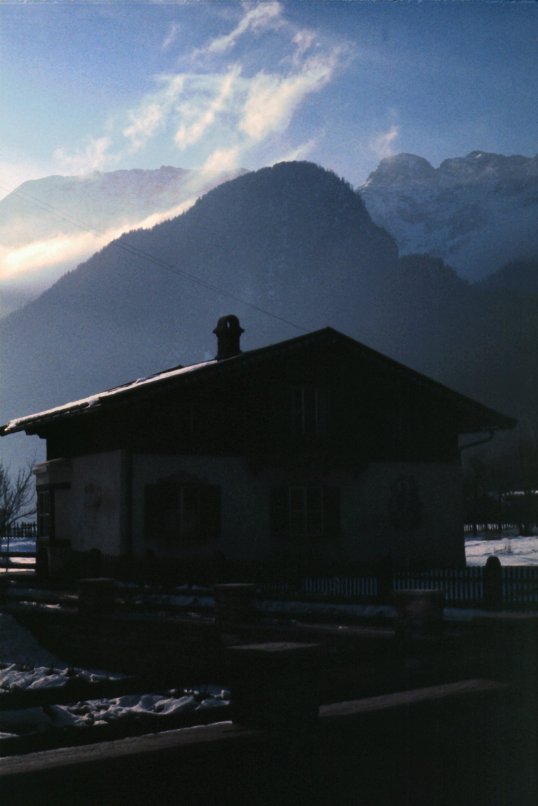 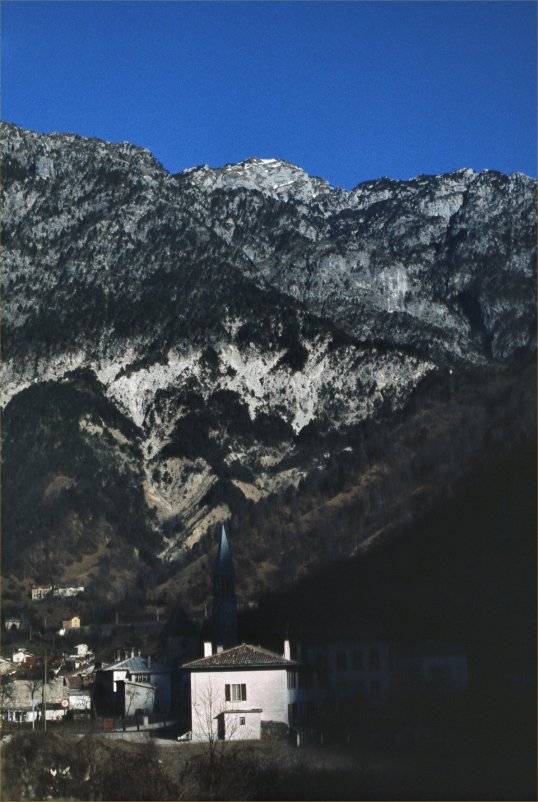 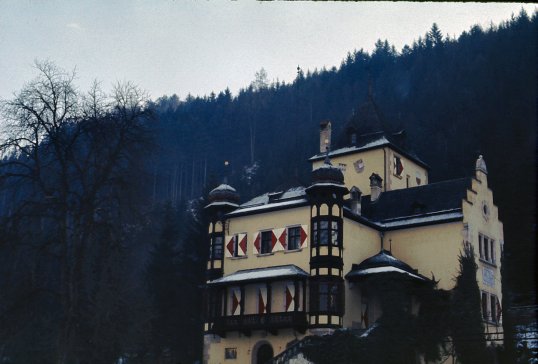 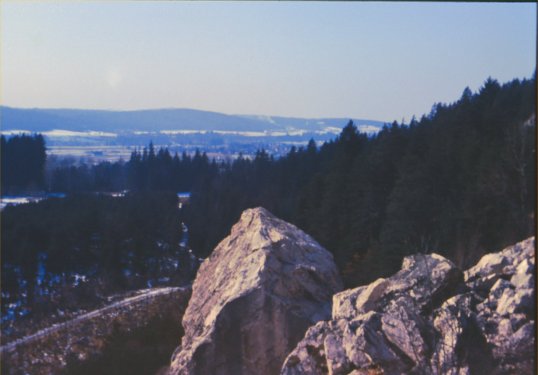 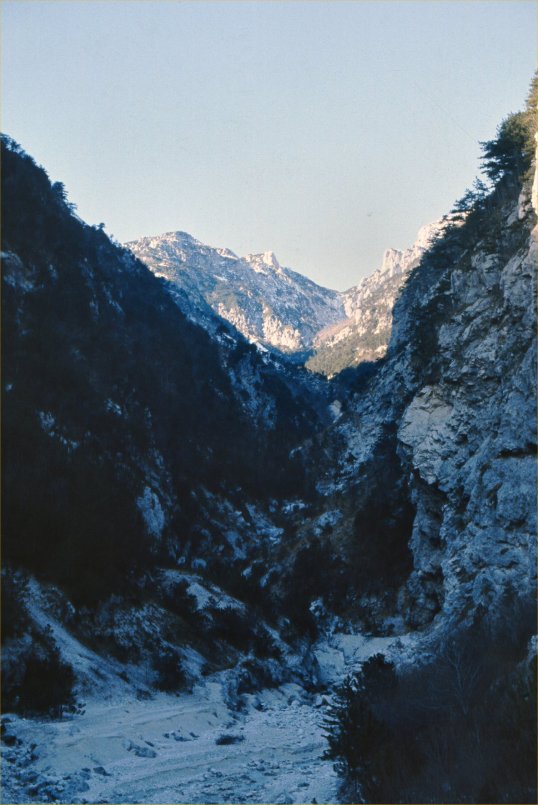 We continued west through Austria toward Switzerland, and passed through the Romansch-speaking areas in the southeast where we encountered some lovely snow sculptures: 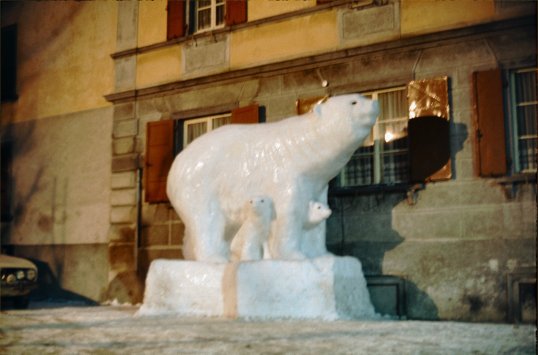 These don’t rival the ones you find up in Sapporo, Japan, but they were impressive enough for me at the time. 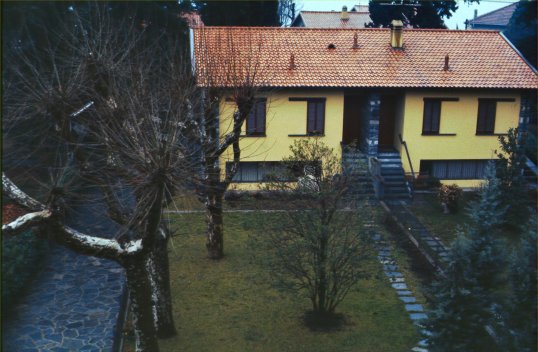 Home and garden near Lake Como

It was a trip not to be forgotten. George, I hope you enjoyed these memories as much as I did.

This article by Art Buchwald appeared in various forms in various newspapers. In honor of a young acquaintance of mine who has been living and studying in France, I reproduce here a version that was published in the Pennsylvania Observer-Reporter on August 1, 1977.

During the past eight years I have made a scientific study of the attitude of European sales people toward a foreign customer. They vary in each country according to temperament and while it isn’t fair to generalize that’s exactly what I’m going to do.

In Italy when a customer walks into a store he is greeted like a long-lost brother.

“Welcome signor; welcome signor. Please come into the shop where it is nice and cool. You do not have to buy anything, you can just look.”

“I would like a poplin shirt. Do you have any?”

While Mama is dragging out the shirts the man says, “Are you from America?”

You say you are.

“I have relatives in Chicago. You know them? The Qualliteris? Look, here is their picture! My cousin has seven children! Please do look, that is Rosita, Antonio, Carlotta, Alfredo, Giuseppe, Charles, and Thomaso. Rosita is seven, Antonio is…”

The shirts finally come. The man says, “Beautiful Egyptian cotton. Notice the pearl-like quality of the buttons, how the tail of the shirt is rounded gently, the pleated pocket and the firm rich feel of the collar. Please to touch it yourself. Where else in the world can you find a shirt like this? Take a dozen. In America you will thank me for selling you these shirts.”

You are touched by his kindness. You buy a dozen. His wife gives your wife a bouquet of flowers. They both escort you to the door You shake hands with them. They shake hands with you. They ask you to come back soon. They tell you not to miss a visit to St Peter’s and they give you the names of a trattoria in Rome and friends in Florence. There are tears in their eyes as you walk away. Everybody is happy.

In London you walk into a store and you are greeted by a man in a tail coat who bows and asks if he can be of help. You ask for the shirt counter. He clicks his fingers and calls for a salesman who rushes up and stands at attention as the man in the tail coat snaps, “Shirts for this gentleman.”

[Editor’s note: In the back of my mind I can hear Captain Peacock calling, “Mr. Humphries, are you free?”]

The salesman says, “Right this way,” and takes you to the counter. “What size and what colour,” he asks.

You tell him you want a poplin and a button-down collar if possible.

He looks down embarrassed as if you had just asked him how much salary he makes. “Is there anything wrong with a button-down shirt?”

“To be frank, Sir, in England we don’t think too much of the button-down collar. Of course you Americans like that sort of thing but we consider it rather iffy, if you know what I mean. It’s just not the sort of thing you would wear except to a very bad cricket match. Of course if you want a button-down shirt I’d be very happy…”

“Ah, the proper shirt,” he smiles. “This is the style now. You will notice the Duke of Norfolk wears only this type of shirt. It is worn by men of distinction of every profession. I’m sure a person like yourself would wear only the latest attire.” He shames you into buying a dozen.

But in France, everything is different. You walk into a shop which is quite empty with six or seven salespeople standing around.

You wait 15 minutes and finally someone comes up to you and speaking in the tone that a Poujadist would use on a tax collector says, “What do you want?” You tell him you want a shirt. “What size?” he says sneeringly.

“Ha!” he shouts. “We don’t have your size. Do you think we carry everyone’s size? How much place do you think we have here? The largest size we have is 16½.”

A look of disappointment comes over his face.

“Ha!” he shouts. “We don’t have white. We only have them in colors. Do you think we can stock both white and colored shirts?”

Another salesman comes over and asks in French what the trouble is. The fellow salesman tells him in French, “This idiot wants a white shirt. First he asks for a size 17 and now he wants it in a 16½. What kind of store does he think we run?”

“These Americans are all crazy.”

You say you’ll take a colored one. The salesman is furious. He shoves the box of shirts in front of you and says, “Please don’t touch them or you’ll have to pay for them.”

You select one and he throws it into a bag. “Four thousand francs,” he says.

You give him a five-thousand franc note.

“Don’t you have change? Do you think we can make change for everyone who comes into the store?”

Everyone looks at you as if you had just slapped the man in the face.

You say you have no change, and there is a conference of the salesman, the manager and the cashier. They keep looking at you and whispering to each other. Finally, the cashier, who writes the entire transaction in a large ledger, produces the thousand franc note.

The salesman slaps the purchase into your hand and throws the change down on the counter. As you walk out of the door you hear him saying to the other people, “C’est incroyable. Incroyable.”

Having lived in Europe in a number of different countries, I can vouch for the fact that this is just barely satire.