In 1959, when my cousins were visiting New York from their country home in Connecticut, something possessed them to go take in a double-feature horror show (either at Loew’s or the RKO theatre, I can’t recall which one.) Double-billed was The Spider and Terror from the Year 5,000. 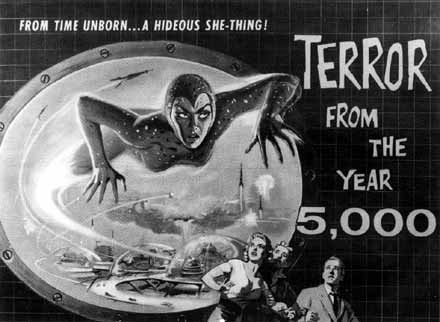 My 8-year-old brain was scarred for decades. The Spider was bad enough, but The Terror had me pissing my pants any time I saw a closet door left ajar.

And not having TV or cable in later life, I missed the opportunity to poke fun at it on MST 3,000.

I found a copy of it at a vintage movie outlet online, and got my dear wife a copy of Don’t be Afraid of the Dark, the one that scared her to Nouakchott when she was young. They’ve been sitting on our shelves unopened, until the other night when the Goodwoman of the House was taking a nap, and I was working on a knitting project.

So I bit the bullet, and in it went.

Surprise! It’s not a bad film at all, as B-movies go. It had a plot, it had a message, and the effects were nowhere near as corny as some other things I’ve seen. And, over half a century later, not terribly scary.

The basic plot: A scientist develops a time machine that has been sending small objects into the future, and bringing back “trade” items – which happen to be highly radioactive. He’s got a fiery young assistant who’s got the hots for his daughter, and a bad case of paranoia as well. The professor’s daughter arranges for a former colleague of her father to come down to the island where the experiments are taking place, and during a demonstration of the machine, a Phi Beta Kappa key is exchanged for a medallion which has “Save us” engraved on it – in Greek.

The professor decides the machine is too dangerous to use until more information can be gathered, but lover-boy (Victor) – who thinks he’s being sidelined – runs the machine at ever higher power until he brings back a lady from the 51st Century (seen above). She’s badly disfigured from the effects of radiation and seems to have hypnotic powers accentuated by shiny fingernails and the thousands of reflective bangles on her outfit, but other than that she’s largely unremarkable. 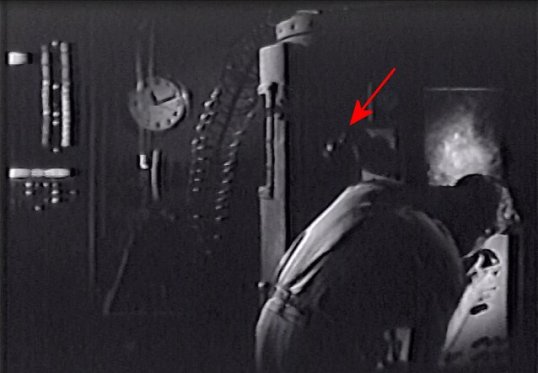 Victor’s about to get a surprise.

Earth of that year is dying of radiation poisoning, and this lady’s mission is to bring back someone with undamaged genes to inject new life into their dying society. Unfortunately, she’s not beneath killing anyone who gets in the way of her mission, including a caretaker and a nurse, whose face she steals (perhaps they had vintage movies in her day, and she had watched Silence of the Lambs). 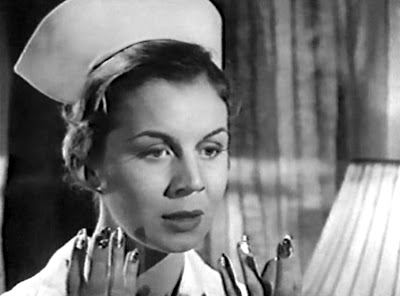 The “Future Woman” wearing a stolen face (actually her own, that of the lovely and talented Salome Jens in her debut rôle.) [1]

At any rate, after much drama, Victor is killed in the lab trying to send the woman back to her time, and the unfortunate visitor is shot. In the end, the professor explains that they don’t need new genetic material, because the future is yet unwritten, and mankind has a chance to avoid atomic holocaust by acting more sensibly now.

Having seen it again, about the only major complaint I had about the film was the soundtrack, which incorporated a lot of musical interludes that sounded like they were lifted from Disney’s Pinocchio. The atmosphere of the movie was serious enough that the tinkle-tinkle passages seemed out of place. Other than that, I give it a thumbs up.

And, it’s nice to know that my horrific memories from the 50’s were nothing more than a child’s untutored perception. 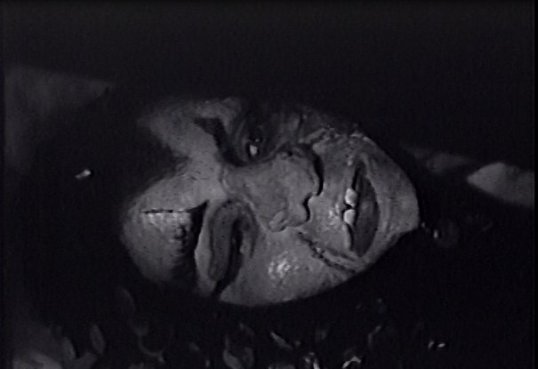 Salome Jens has had a vigorous acting career, and in later years has played some very-recognizable characters (at least, recognizable by their makeup). 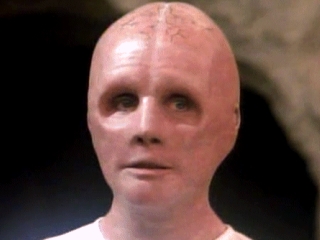 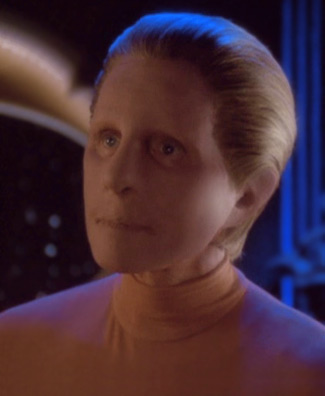 Star Trek DS9 – The female shapeshifter and “ambassador” of the Founders.

Salome Jens and Gil Rogers in I Knock at the Door and Pictures in the Hallway, 2007.