A recent article in Science Daily outlines some research on how the brain changes in response to curiosity. Executive summary: “The more curious we are about a topic, the easier it is to learn information about that topic.” I’ve long known this about my own mind – if I get really curious to learn something, it absorbs more easily and sticks around longer.

The study revealed three major findings. First, as expected, when people were highly curious to find out the answer to a question, they were better at learning that information. […]

Second, the investigators found that when curiosity is stimulated, there is increased activity in the brain circuit related to reward. […]

Third, the team discovered that when curiosity motivated learning, there was increased activity in the hippocampus, a brain region that is important for forming new memories, as well as increased interactions between the hippocampus and the reward circuit.”

The full article is worth a read.

Bill Watterson illustrated this principle delightfully almost 20 years before this study was ever done. Calvin and Hobbes find a snake in the garden. They marvel at its fluidity, the flicking tongue, wonder how they sleep with their eyes open, what they eat, and realize they know nothing about snakes. Hobbes suggests that perhaps Calvin’s mom would get them a book. It’s a captivating idea, until Calvin realizes that it’s summer vacation, and he’s determined to learn nothing, whereupon Hobbes intones, “If nobody makes you do it, it counts as fun.” The last panel makes the whole strip: 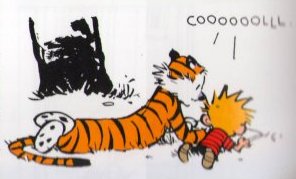 The problem with curiosity today is captured by Randall Munroe in his wonderful XKCD panel: 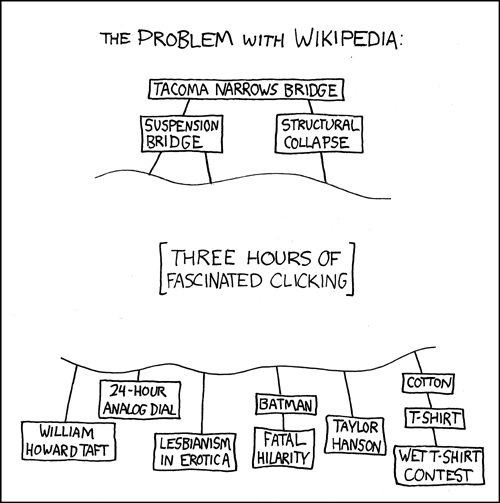 This holds true not just for Wikipedia or TV Tropes (Stay away! Stay away!) but for the Internet in general. Falling down the rabbit hole makes time compress in a way that Isaac Asimov could never have imagined.

That said, I would have paid dearly for the internet when I was a child in the 50s. I wanted to know things. I wanted to understand things. But I didn’t have the patience to search the World Book, or the Brittanica, or the Americana, or the card catalogs, only to come up with results for a single topic.

On the other hand, given what’s out there, it’s probably a blessing that it wasn’t available.

I struggle enough as it is.