Each of the individuals below was born, not in the previous century, but in the one before that. 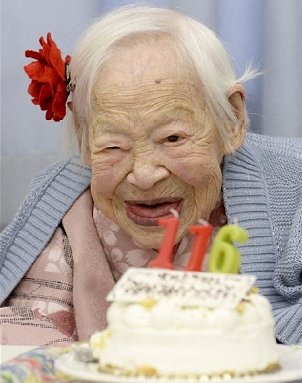 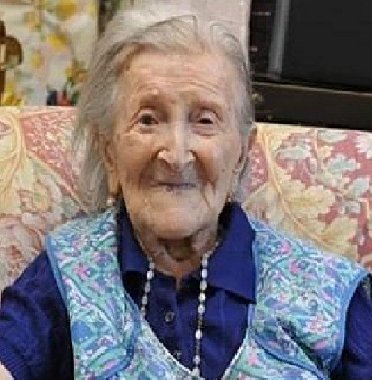 These ladies were born before the modern flyswatter and thumbtack were patented, before the assembly line was introduced, before windowed envelopes and hearing aids and postage meters and (official) teddy bears. They have lived to see genetic engineering, 3D printing, the beginning and the end of space exploration (we’re still waiting for the rebirth), and all of the other wonders of our age. That’s an amazing lifespan.

Brazil is claiming a male contender to the throne, and given the world’s population and the many areas where record-keeping is not a priority, there may be others. But what is certain is that the human body currently has a finite limit – and even when you get older than dirt, things have pretty much worn out beyond repair.

I’m reminded of an old joke, one of my favorites:

The first was a hale and hearty 98-year-old, who didn’t look a day over 75. When asked the secret to his long life, he responded, “I’ve always been a vegetarian, and drink nothing but water.”

The second was 103, and while frail, still had a twinkling eye and a robust mind. His secret? “I’ve never smoked, as long as I could I would walk three miles a day, and I always read my Bible.”

The last gentleman was a shattered wreck of a man, nodding in his wheelchair and looking older than Methuselah’s grandfather. The host asked him, “And to what do you attribute your great age?” The guy wheezed out, “I smoked fifteen cigars a day. I never drank nothin’ but whisky, and lots of it. I never exercised, unless you count trying to bed every woman that crossed my path.” “And just how old are you?” asked the interviewer. Came the response: “Twenty-three.”

Truth is, we never know when the bus will come for us¹, but  the more we do to take care of our corporeal chariots, the better our chances of having a higher quality of life.

Three cheers to these amazing ladies whose lives – for whatever reason – have spanned three centuries.

The Old Wolf has Spoken