Poor Pluto. I wrote a detailed essay about my feelings back in 2014, before New Horizons had gotten close enough to reveal the stunning images of Pluto and Charon that it painstakingly sent back at 38 kbps.

Yeah yeah, I get it. Science moves on. Clyde Tombaugh discovered the Kuiper Belt; Pluto is just another trans-Neptunian object that happened to get captured, and not even the biggest. There are doubtless many more large ones yet to be discovered.

But Pluto was a part of the public’s consciousness as a planet for 76 years – from 1930 when Dr. Tombaugh discovered it, until it was reclassified by the IAU, a move that was opposed by many scientists and astronomers.

I even wrote to Mike Brown, who has referred to himself as “the man who killed Pluto,” and expressed my feelings that for historical reasons, Pluto should have been “grandfathered in” as a planet; he was kind enough to reply, and explained that while he understands why I and others feel emotionally attached to Pluto, the IAU took an opportunity to make planetary classification meaningful instead of arbitrary, which is scientifically more important than nostalgia.

But I’m still sad. And I’m not the only one. Dr. Maggie Lieu, a research fellow at the ESA (European Space Agency) recently posted on Twitter, 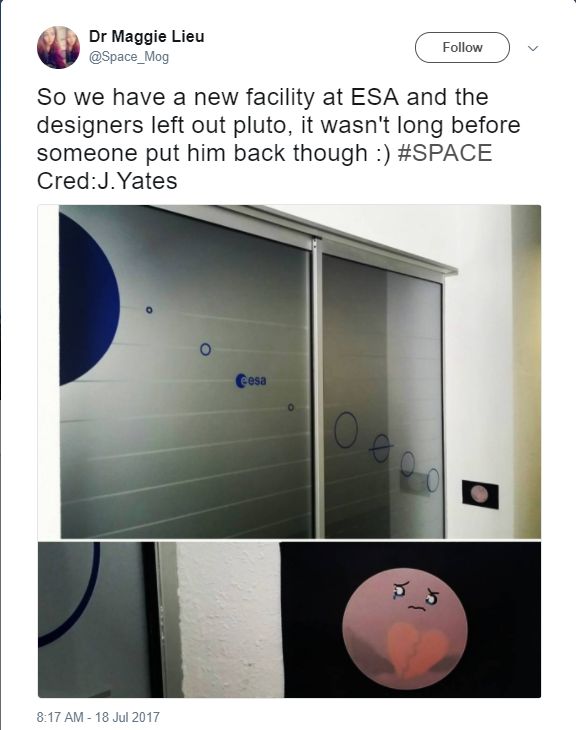 The cleaners took Pluto down, but he was quickly replaced: 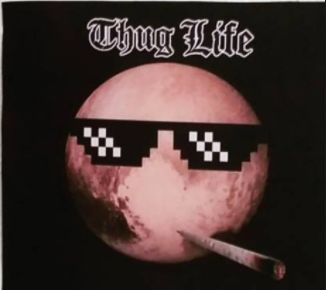 And the current status is this: (If you can’t read the text, it says 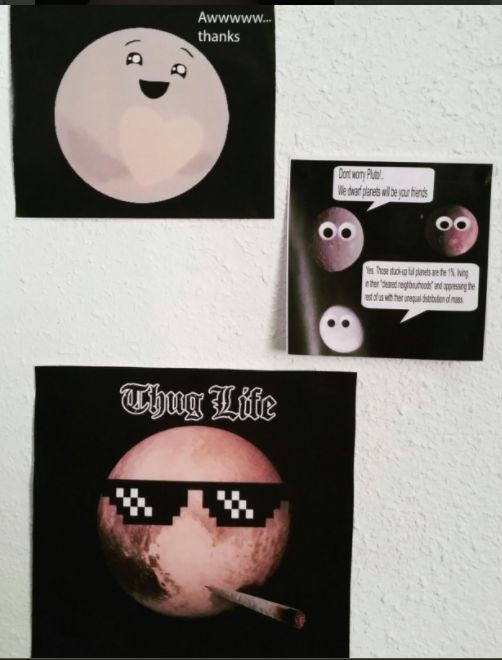 I accept the science, but the IAU’s designation is, after all, just academic nomenclature – and whatever the scientists of today or the future choose to call Pluto, for me it will be the 9th planet in our solar system, Sol IX, forever.

PS: One of my all-time favorite Woot! shirts, “Gardening at Night.” (Pluto is peeking out at the bottom)

Edit: A couple of comments over at Facebook’s “Unapologetic Society of Pluto Huggers” adds a bit more Tabasco™ to this ongoing debate, and I quote them here with gratitude, although without attribution:

It wasn’t consensus. It was a vote of a tiny minority of the IAU membership that manipulated the situation to ram their flawed definition through toward the end of the conference when most of the members had left to go home. This definition was not arrived at by peer review and consensus of a majority of astronomers the way scientific opinion normally changes; it was essentially imposed by fiat and it’s been controversial since Day One. The IAU is dominated by astrophysicists who seem to find the definition more acceptable than planetary scientists (astronomers who study planets) do, and feelings were raw so they didn’t want to bring the subject up again anyway. Several hundred planetary scientists immediately signed a declaration saying they weren’t going to use this definition and to this day most planetary scientists continue to reject it.

There never was any such consensus. Mike Brown is not an IAU member and had no say in the vote, despite his claims otherwise. He appears to have a personal, unscientific interest in being known as the person who “killed” Pluto.
Just four percent of the IAU voted on the controversial planet definition, and most were not planetary scientists but other types of astronomers. The vote was conducted in vi8olation of the IAU bylaws, which prohibit placement of a resolution on the floor of the General Assembly without it first being vetted by the proper committee. This resolution was literally thrown together the night before the vote. After it was adopted by a vote of 333-91, several hundred planetary scientists signed a formal petition rejecting it.

So there’s a bit more information to add to the mix. Clearly, the debate in the scientific community is far from settled. Which is a good thing.

See, for the longest time, I’ve been fascinated by space, and the stars, and astronomy. When I was a kid in the 1950s I’d go from New York City where I lived to visit one of my uncles in the country, and he had an interesting and eclectic library, which things like CS Lewis’ Out of the Silent Planet or The World of Å by A.E. van Vogt. He also had this book:

which I would spend hours and hours perusing, right around the same time Alfred Bester was publishing the exploits of Gully Foyle. In my own mind, the stars were my destination.

And of course, there were Nine Planets. Nine. 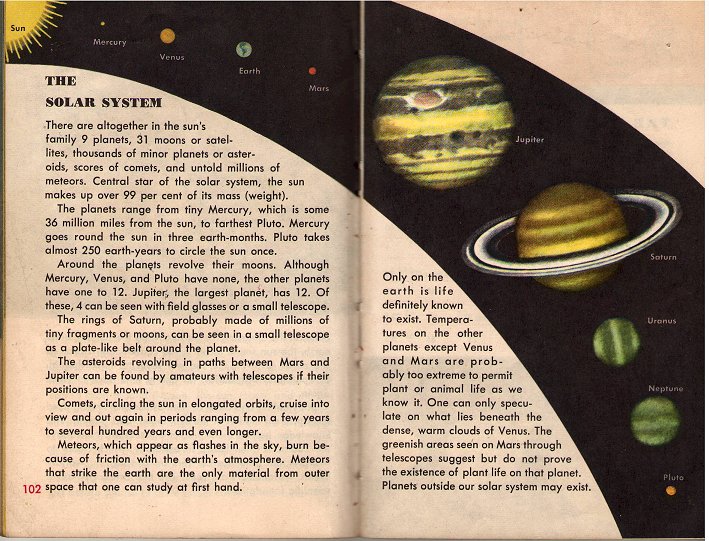 This was cemented into my mind when, during the same epoch, I read Heinlein’s Have Space Suit, Will Travel. Beyond being a delightful space opera, it was full of hard science, too. Kip Russell was a genius who thought higher math was as addictive as peanuts, and had all sorts of astronomical data tucked away in his mind which helped him figure out where his evil worm-faced kidnappers were taking him and his little companion, Peewee.

“Mother very thoughtfully made a jelly sandwich under no protest.” Could you forget that after saying it a few times? Okay, lay it out so:

The “prices” are distances from the sun in astronomical units. An A.U. is the mean distance of Earth from Sun, 93,000,000 miles. It is easier to remember one figure that everyone knows and a lot of little figures than it is to remember figures in millions or billions. I use dollar signs because a figure has more flavor if I think of it as money – which Dad considers deplorable. Some way you must remember them, or you don’t know your own neighborhood. (Heinlein, Robert A., Have Space Suit, Will Travel).

And no, I could never forget it either. There were nine planets. Nine. And the mnemonic was seared into my consciousness forever. When Pluto was demoted from planetary status to “dwarf planet,” I was devastated. I refused to give in. No. Still a planet, always a planet. Apparently, others felt the same way I did, and for similar reasons:

I really wasn’t too concerned about Pluto’s demotion from being a planet. It was a non scientific discussion about a silly serious definition.

Well, at least that was until they decided to TAKE AWAY PLUTO’S NAME. WTF? So, please Mr It’s-Not-A-Planet-Just-A-No-Name-Dwarf Astronomer, what am I supposed to use for my mnemonic now? Huh?

[Update: Thanks Dan]
Pluto may have lost it’s planetary status, but it GOT A NEW NUMBER! It went from merely 9 to a rocking 134340! Wow, what a raise. I am however bummed that my favorite memonic, “Mother very thoughtfully made a jelly sandwich under no protest” learned as a teenager reading Robert Heinlein, no longer works.

Sure tell me Pluto it isn’t a planet, but stop MESSING AROUND WITH MY CHILDHOOD! (From Eclectics Anonymous)

And that’s the crux of my objection: don’t screw around with what I learned as a child. If nothing else, Pluto should have been grandfathered in, because despite its true status as a captured Kuiper Belt object (as clearly shown by its off-kilter orbit and the identification of countless other trans-Neptunian objects), it was treated as a planet since it was discovered by Clyde Tombaugh.

Sadly, science moves on. As Neil de Grasse Tyson has said, the universe is under no obligation to make sense to us – it’s just out there, waiting to be discovered. In much the same way as they took away my beloved Brontosaurus, we learn new things every day. Now, as New Horizons approaches Pluto for a scheduled 2015 rendezvous, my excitement to see our last little solar system outlier (at least, that’s the way it was in the 50s) knows no bounds.

“The [above] animation of Pluto and its largest moon, Charon, was created using a series of images captured by the New Horizons spacecraft as it continues its long journey to the distant planetoid. Taken from a distance of 422-429 million km, the images are not for scientific study, but for optical navigation between worlds. (From i09)

Those pictures are going to get a lot clearer and more wonderful as New Horizons approaches, if the results from Cassini and other planetary probes are any indiation. But based on what I’m seeing there, it may turn out that Pluto and Charon are not really planets at all, but nothing more than space junk, garbage that looks more like comet 67P/Churyumov-Gerasimenko. And if that ends up being the case, I’ll have to throw my visceral but irrational defense of Pluto’s planetary status onto the trash heap of disproven theories, as sad as it may be.

Our Solar System is a lot bigger now than it used to be. No one ever made mention of the Kuiper Belt or the Oort cloud. It was just us, although some scientists even back then were looking for the mysterious “Planet X” [1] which would help to explain certain orbital anomalies. 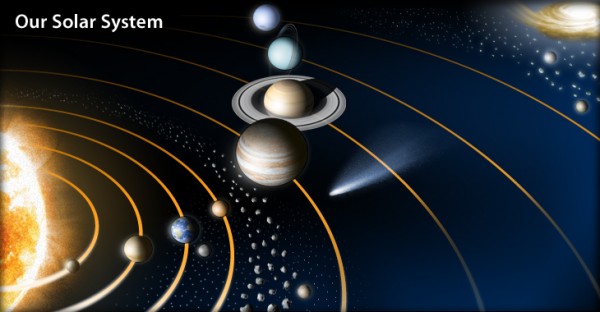 Image: NASA’s Solar System Exploration. Click through for the full interactive graphic, along with a lot of other wonderful information.

Some other really good stuff about space and stars and especially planets is found at Starts with a Bang!

In the end, better minds than mine have come to terms with advancing knowledge. A quote at Wikipedia’s article about Clyde Tombaugh is particularly comforting:

Tombaugh’s widow Patricia stated after the IAU’s decision that while Clyde may have been disappointed with the change since he had resisted attempts to remove Pluto’s planetary status in his lifetime, he would have accepted the decision now if he were alive. She noted that he “was a scientist. He would understand they had a real problem when they start finding several of these things flying around the place.”Hal Levison offered this perspective on Tombaugh’s place in history: “Clyde Tombaugh discovered the Kuiper Belt. That’s a helluva lot more interesting than the ninth planet.”