I previously blogged about dominant faiths by county in the USA; now comes a map showing the second largest religion in each country. 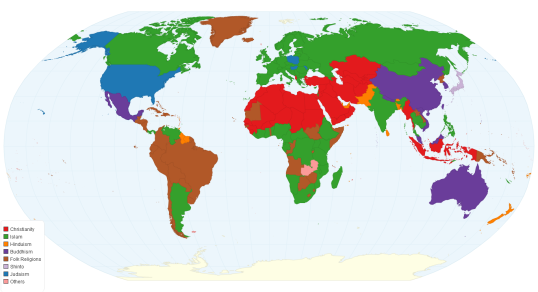 Despite the growing influence of humanism in American society, we remain a country of believers. This interesting map shows the dominant religion in the USA listed by county, according to the 2010 Religion Census. The original map is hosted at the RCMS page.  Click the map below to view it in full size. 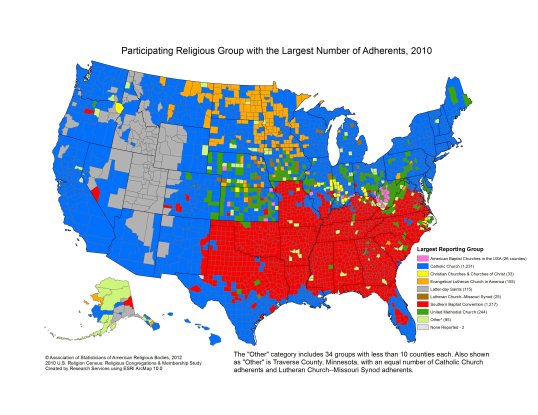 Based on total land area covered, the dominant faiths are Catholic, Baptist, Latter-day Saint, Evangelical Lutheran Church in America, and United Methodists. By numbers, the five largest Christian denominations are:

In comparison, those who have no theistic practices (agnostic, atheist, or “nothing in particular”) as of 2008 numbered around 34 million, or 15% of the population. It is interesting to note that while this group is still small relative to the total population, they are the next largest group after Catholicism.

I’ve long been intrigued by comparative religion studies and the demographics of belief, and so this map caught my attention. More information on this topic can be found in various places around the web, but a good place to start is the Wikipedia article.

Thus proclaims solemnly an article in the LA times. I laughed hard when I thought about my humanist friends frantically searching for this button on their keyboards: 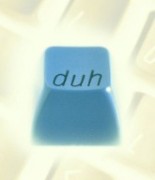 It has long been known that independent thought and religious beliefs don’t blend well, but I can’t read an article like this without considering its implications, simply because I’m a person of faith who seeks truth wherever it can be found.

The vastness and complexity of our universe, from the macro to the micro scale, virtually gobsmacks me. I can’t contemplate the awesomeness of the cosmos or the incredible harmony of what happens at the subatomic level (and mind you, I’m looking at all of this from almost a layman’s perspective because I can’t do the math) without going back to my pinball days for an analogy:

At the same time, I am unable to contemplate this same vast complexity and wrap my head around the concept of hydrogen atoms evolved to consciousness, with all due respect to Carl Sagan, who I think was a worthy purveyor of humanism.

The thing is – occam’s razor notwithstanding – science doesn’t explain it all for me. As deep as we’ve gone, as far out as we’ve peered, we haven’t even begun to scratch the surface of the cosmic repository of knowledge, and there are some areas that science and faith just can’t touch. Faith won’t explain dark energy or find a Higgs Boson, and science will never quantify Beethoven, Frida Kahlo or Maya Angelou.

We get into trouble when we try to look at the universe in terms of either/or, when we have the option of seeing it as both/and. Doing the former gets us into trouble on both sides of the fence.

The error on the right neglects to account for things which have been proven beyond all reasonable doubt; the error on the left (which is only implied,) is for scientists to insist that the absence of proof of something equates to its nonexistence. Both errors are fatal, and lead to untenable positions.

“But there’s no empirical proof whatsoever for the existence of metaphysical phenomena, therefore we can’t factor them in,” says the scientist. This is why I absolutely love the novel Contact: Ellie Arroway was left with no proof that what she had experienced was real, yet despite the machinations of the scientific world to deny what could not be proven, she would go to her grave with a sure knowledge of what had happened to her was real. Joseph Smith, the Latter-day Saint prophet, said much the same: “I had seen a vision; I knew it, and I knew that God knew it, and I could not deny it, neither dared I do it.” For him, his experience was real, and all the opposition in the world could not change that; he went to his death for the sake of his convictions.

While I’m not sure that by studying one small facet of the universe for long enough will lead to a comprehension of totality as some Eastern philosophies hold, I warn against the danger of drawing false conclusions because one is not able to see totality. The following illusion is a case in point: 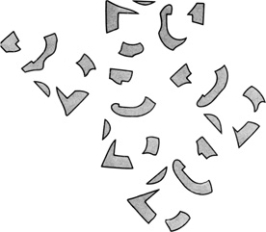 If you don’t know what you’re looking at – and in this case, even if you do – it’s very hard to discern the totality of the picture. If, however, you look at the picture another way,

Thus in one sense, I agree fully with the headline of the article. When science tries to look at religion and cram it into the grand unified theory it fails miserably, and religion comes up poor. As a result, many people who were raised in households of faith simply allow their spiritual walk to fall by the wayside because it doesn’t fit within the body of scientific knowledge, and they effectively shut the door to half of the human experience. Conversely, when religion tries to make scientific fact conform to pre-defined conclusions, we get things like this:

I do believe that all truth can be circumscribed into one great whole. Even the disciple Paul, for all his faith, knew that our vision and our knowledge on this earth is sorely limited, saying, “For now we see through a glass, darkly; but then face to face: now I know in part; but then shall I know even as also I am known.”

The more we look at the puzzle, the more pieces we will be able to fit in. As for me and my house, I refuse to try to solve the puzzle by looking at only half the pieces, and pretending the other half really belongs to a different picture.