Even though I lived in Switzerland for around 5 months, I never had a chance to see the “Lion of Lucerne,” a stunning monument to the Swiss Guard who perished in 1792 during the French Revolution, when revolutionaries stormed the Tuileries Palace in Paris, France. 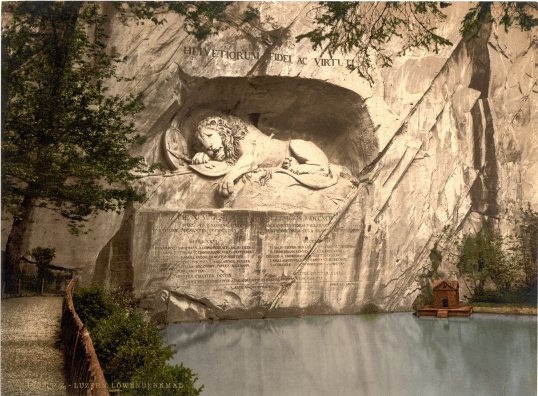 This beautiful tribute was designed after 1818 by noted Danish sculptor Bertel Thorvaldsen[1], and carved between 1819 and 1820 by Lukas Ahorn.

Of this statue, Mark Twain said:

“The commerce of Lucerne consists mainly in gimcrackery of the souvenir sort; the shops are packed with Alpine crystals, photographs of scenery, and wooden and ivory carvings. I will not conceal the fact that miniature figures of the Lion of Lucerne are to be had in them. Millions of them. But they are libels upon him, every one of them. There is a subtle something about the majestic pathos of the original which the copyist cannot get. Even the sun fails to get it; both the photographer and the carver give you a dying lion, and that is all. The shape is right, the attitude is right, the proportions are right, but that indescribable something which makes the Lion of Lucerne the most mournful and moving piece of stone in the world, is wanting.

The Lion lies in his lair in the perpendicular face of a low cliff–for he is carved from the living rock of the cliff. His size is colossal, his attitude is noble. How head is bowed, the broken spear is sticking in his shoulder, his protecting paw rests upon the lilies of France. Vines hang down the cliff and wave in the wind, and a clear stream trickles from above and empties into a pond at the base, and in the smooth surface of the pond the lion is mirrored, among the water-lilies.

Around about are green trees and grass. The place is a sheltered, reposeful woodland nook, remote from noise and stir and confusion–and all this is fitting, for lions do die in such places, and not on granite pedestals in public squares fenced with fancy iron railings. The Lion of Lucerne would be impressive anywhere, but nowhere so impressive as where he is.”

Next trip to Switzerland.

[1] Perhaps Thorvaldsen’s most famous work is his Christus in the Vor Frue Kirke in Copenhagen, of which a copy resides in the visitor’s center of the Church of Jesus Christ of Latter-day Saints in Salt Lake City.