We live in a tumultuous world, with a lot going on around us. There’s a lot that we can’t do much about. But I’ve always felt that corporate douchebaggery and abuse of power need to be called out whenever it happens.

According to a video posted at Facebook, and reported on at the Courier Journal, the following events just took place. 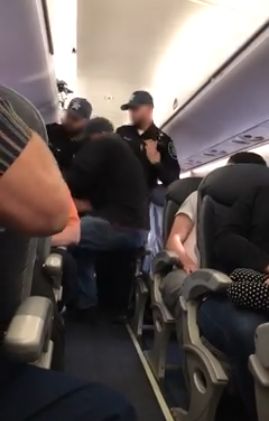 So here’s an elderly Asian doctor who needs to see his patients in the morning, who has a confirmed, paid ticket on a United Airlines flight, and because UA overbooked and wants their employees to have free seats, three armed thugs come on board and knock the old man out before dragging him, bloodied, off the plane, because he wouldn’t surrender his rights.

This is what should have happened:

Disclaimer: I wasn’t there. I didn’t see the event. There are always more facts to any story than are being reported. But regardless, this looks really bad at first blush. If United’s corporate leadership were any sort of humans, they’d be filling their britches and entering DEFCON-5 damage control mode, but I sincerely doubt they’ll lose a minutes sleep over the event.

Don’t fly United. This is really sad in a lot of ways, because for the longest time United was the best of the best in airlines in the USA, and I have a long history of flying with them since the 50s.

4 responses to “United breaks guitars, and beats up paying customers.”