Sometimes I find myself under obligations of work requiring quiet and seclusion such as neither my comfortable office nor the cozy study at home insures. My favorite retreat is an upper room in the tower of a large building, well removed from the noise and confusion of the city streets. The room is somewhat difficult of access and relatively secure against human intrusion. Therein I have spent many peaceful and busy hours with books and pen.

I am not always without visitors, however, especially in summertime; for when I sit with windows open, flying insects occasionally find entrance and share the place with me. These self-invited guests are not unwelcome. Many a time I have laid down the pen and, forgetful of my theme, have watched with interest the activities of these winged visitants, with an afterthought that the time so spent had not been wasted, for is it not true that even a butterfly, a beetle, or a bee may be a bearer of lessons to the receptive student?

A wild bee from the neighboring hills once flew into the room, and at intervals during an hour or more I caught the pleasing hum of its flight. The little creature realized that it was a prisoner, yet all its efforts to find the exit through the partly opened casement failed. When ready to close up the room and leave, I threw the window wide and tried at first to guide and then to drive the bee to liberty and safety, knowing well that if left in the room it would die as other insects there entrapped had perished in the dry atmosphere of the enclosure. The more I tried to drive it out, the more determinedly did it oppose and resist my efforts. Its erstwhile peaceful hum developed into an angry roar; its darting flight became hostile and threatening.

Then it caught me off my guard and stung my hand—the hand that would have guided it to freedom. At last it alighted on a pendant attached to the ceiling, beyond my reach of help or injury. The sharp pain of its unkind sting aroused in me rather pity than anger. I knew the inevitable penalty of its mistaken opposition and defiance, and I had to leave the creature to its fate. Three days later I returned to the room and found the dried, lifeless body of the bee on the writing table. It had paid for its stubbornness with its life.

To the bee’s shortsightedness and selfish misunderstanding I was a foe, a persistent persecutor, a mortal enemy bent on its destruction; while in truth I was its friend, offering it ransom of the life it had put in forfeit through its own error, striving to redeem it, in spite of itself, from the prison house of death and restore it to the outer air of liberty.

Are we so much wiser than the bee that no analogy lies between its unwise course and our lives? We are prone to contend, sometimes with vehemence and anger, against the adversity which after all may be the manifestation of superior wisdom and loving care, directed against our temporary comfort for our permanent blessing. In the tribulations and sufferings of mortality there is a divine ministry which only the godless soul can wholly fail to discern. To many the loss of wealth has been a boon, a providential means of leading or driving them from the confines of selfish indulgence to the sunshine and the open, where boundless opportunity waits on effort. Disappointment, sorrow, and affliction may be the expression of an all-wise Father’s kindness.

Consider the lesson of the unwise bee!

“Trust in the Lord with all thine heart; and lean not unto thine own understanding. In all thy ways acknowledge him, and he shall direct thy paths” (Prov. 3:5–6). 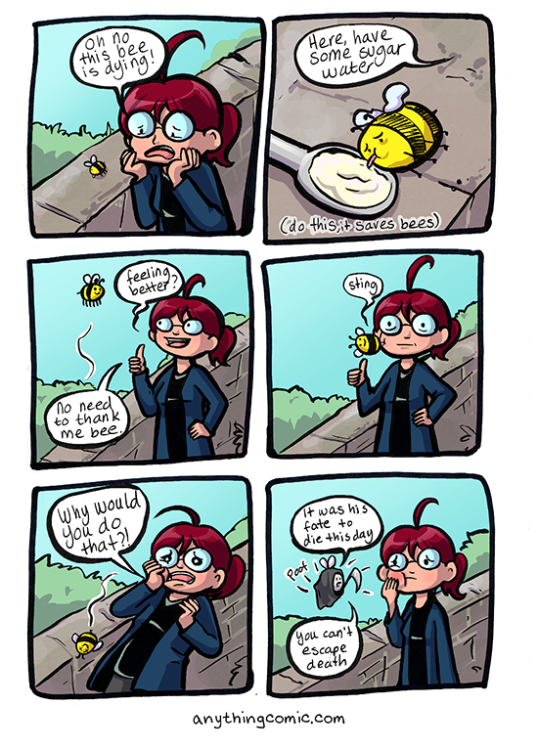 Visit anythingcomic.com, and someone please think of the bees!