Updated 2/23/2018 after the Pennsylvania school shooting and the Las Vegas Massacre. 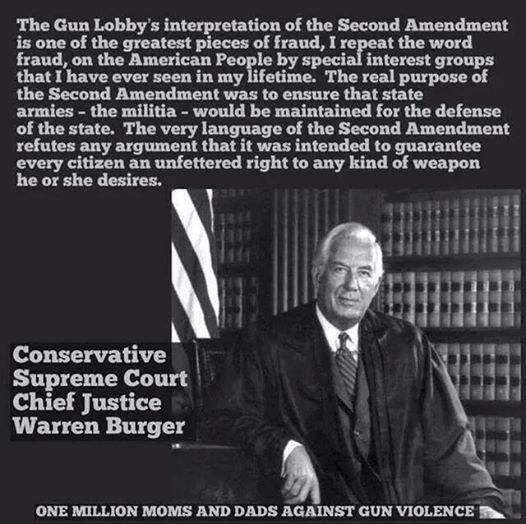 I did a litte digging just to make sure this wasn’t Snopes-worthy, and it turns out that this quote came from a PBS News Hour interview in 1991 and is correctly attributed to Chief Justice Burger.

With two school shootings in two weeks, (Oregon last week, and Arizona yesterday), it seems only right to be asking questions.

An article originally published in Parade magazine in 1990, asks some really good ones (excerpt below), and I submit it here for consideration. At the time of this update, you can still see the full article at Google Books (click the link for page 377):

The Constitution does not mention automobiles or motorboats, but the right to keep and own an automobile is beyond question; equally beyond question is the power of the state to regulate the purchase or the transfer of such a vehicle and the right to license the vehicle and the driver with reasonable standards. In some places, even a bicycle must be registered, as must some household dogs.

If we are to stop this mindless homicidal carnage, is it unreasonable:

These are the kind of questions the American people must answer if we are to preserve the “domestic tranquillity” promised in the Constitution.

What is clear is that in today’s society, the domestic tranquility is not being preserved, nor are the inalienable rights of life, liberty, and the pursuit of happiness mentioned in the Declaration of Independence. School shootings appear in the news regularly, but less-reported is the daily slaughter in our inner cities and elsewhere, for example the recent murders of a dog walker and a backpacker by three drifters in California. Articles like this surface, are news for a day, and are then forgotten, and nobody seems to care that gang-bangers are killing each other and innocent bystanders with reckless abandon. For the victims of such acts of violence, somehow those inalienable rights are failing to apply, and it must stop.

The gun lobby’s interpretation of the Second Amendment can be summarized by two flags that I’ve seen flying in my own neighborhood:

both of which echo the “cold dead hands” sentiment originated by the Citizens Committee for the Right to Keep and Bear Arms and popularized by Charlton Heston.

One of my European colleagues asked, at a Facebook discussion of this issue,

You do realize that, seen from abroad, you all seem to have taken leave of your senses?

A libertarian friend of mine responded,

And from an American’s perspective, … you appear to be incredibly vulnerable.

These are the views from the polar opposites. We have to find a middle ground, and we have to stop the carnage. Not to do so is to sacrifice our humanity at the altar of death. With the words of Warren Burger ringing in my ears – and it’s to be remembered that he was a conservative justice, not a liberal one – the questions he asks appear both valid and sane.